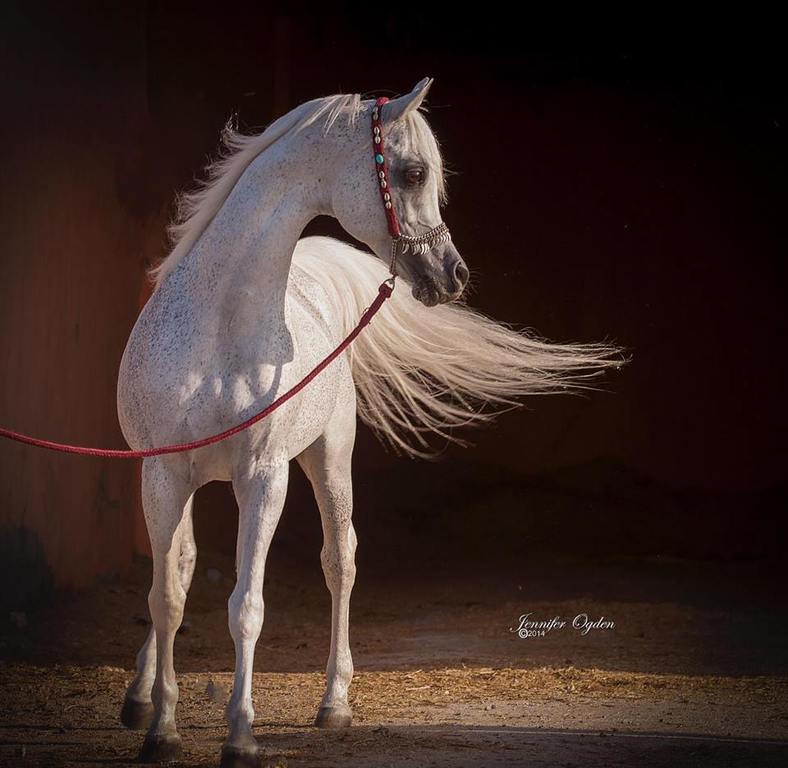 For the very first time, breeders in the United States have access to Authentic Ibn Nawaal and his extraordinary bloodlines.  While most stallions might have prominent horses scattered throughout their pedigrees, Authentic Ibn Nawaal’s ancestry reflects legendary horses from top to bottom and through both sire and dam lines.

Bred by Rosemarie Kolster of the noted Authentic Egyptian Stud in Germany, Authentic Ibn Nawaal’s sire is Maysoun, a son of Ansata Halim Shah, a stallion credited with creating a revolution in Arabian type around the world.  Maysoun’s dam, Maysouna, has two lines to the Nazeer son Galal and traces in tail female to Moniet El Nefous, perhaps the most famed Saqalwiyah Jidraniyah mare in history.  Authentic Ibn Nawaal was named in honor of his famous dam, AK Nawaal.  The high-selling mare at the 1988 Bentwood Farms Sale, she was purchased by Count Federico Zichy-Thyssen for his breeding program in Argentina before later going to Germany.  AK Nawaal was sired by The Egyptian Prince, a Morafic son known for producing exceptional broodmares.  An artful blend of the Dahmah Shahwaniyah and Saqlawi Jidraniyah strains, the pedigree of Authentic Ibn Nawaal truly shines with the brightest luminaries in Straight Egyptian history:  four Nazeer sons – Morafic, Ansata Ibn Halima, Galal and Alaael Din; and four Nazeer daughters – Bint Mona, Bint Maisa El Saghira, Ansata Bint Mabrouka and Ansata Bint Bukra.

Authentic Ibn Nawaal is the sire of international winners.  He is a consistent producer of smooth-bodied horses that are of sound structure, have great tail carriage and motion, excellent legs and long, well-laid back shoulders along with his large dark eyes.   Together with intelligence and character of which his offspring are endowed makes him a superb source of attributes highly sought after by many American breeders to further enhance their programs.